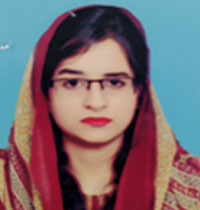 Ms. Ammara Hassan has done B.Sc. (Hons) Allied Health Sciences and has been currently serving in the office of DG Audit (federal government) Islamabad as Deputy Director Audit. She has previously also served as Assistant Chief Accounts Officer in the Chief Accounts Office, Ministry of Foreign Affairs, Islamabad for three years. She has five years of experience in Pakistan Audit and Accounts service. Her areas of professional interest include the public sector accounting and auditing and public sector financial management.

Climate change has become a harrowing reality in the modern era. The level of carbon dioxide has been rising constantly and is the most critical challenge in the current century. There has been an evident impact of this phenomenon on human societies' overall economic and social health. Pakistan has not been an exception in this regard, and the country has been facing enhanced carbon emissions, which is recorded to rise to 123% from 1994 to 2015 according to the Intended Nationally Determined Contribution (INDC) (Ahmed, 2018). It has been speculated that this figure would rise to 300 percent, keeping in view the thriving emission from the energy and agricultural sector. However, to nip this evil in the bud, Pakistan has been a party to the Paris Agreement of the United Nations Framework Convention on Climate Change (UNFCCC). 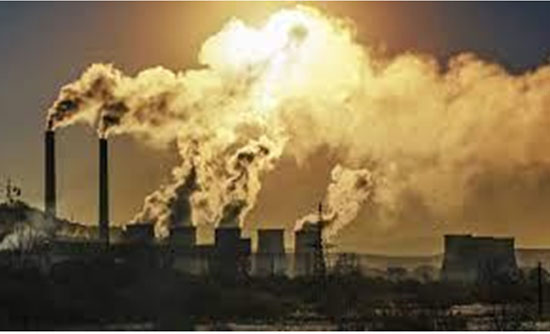 As far as the vulnerability of Pakistan to the drastic climate changes is concerned, it ranks as the 5th most top vulnerable country (Abubakar, 2019) and has sustained an economic loss of around four billion USD between 1994 to 2013. The federal expenditure to manage the negative impact of this climate change has also been rising proportionally and is recorded to rise from 5.8% to 7.6% of the entire allocations (Asian Development Bank, 2017). Another threat to the climate sustainability in Pakistan is the constant rise in the Green House Gas emission, which currently stands at the level of 405 Mt CO2 and is expected to rise at the rate of 6 % annually. In the light of this factual and figurative position, this paper destines to study the role of the Supreme Audit Institution of Pakistan to keep a check on the expenditure about the climate change and to devise the evolving audit techniques in line with the international practices to monitor the carbon emission and its reduction effectively.

Currently, the highest financial governing institution of the monetary transactions on behalf of the federal government in Pakistan is the office of The Controller General of Accounts. This office performs the country-wide pre-audits and disburses the payments, records the transactions, and prepares the consolidated financial statements. To streamline the entire process ranging from budget allocation to the disbursement of payments, the fully automated system under the flagship of Project to Improve Financial Reporting and Auditing (PIFRA) has been implemented in 2009. The comprehensive information regarding the budgetary allocation and spending is reflected through the digitally generated fiscal reports via the Financial Management Information System (FMIS) every month. Later on, these reports are compiled in the form of Annual Financial Statements of the federal government based on the format of IPSAS, along with the statement of appropriation of the object-wise grants for the whole fiscal year.

There is a significantly crucial role of the Audit as it directly influences the public opinion through the disclosure of the performance of the government to ensure transparency. The formulation of future goals and policies also significantly depends on the feedback provided by the Audit institution of the country as well as the status of carbon emission from various public sector domains of the country. The statistical analysis of the sector wise carbon emission in Pakistan is depicted in the following chart. This figure depicts high level of carbon emission from the agricultural and manufacturing sectors of the country. 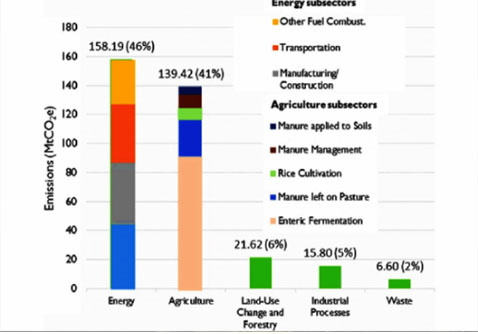 Keeping in view the recent upheaval of climate change phenomenon, there is an even bigger responsibility of the Audit to carry out the Audit and present the report to the legislature. The reason lies in the constantly rising share of carbon emission from the public sector. In Pakistan's context, the office of the Auditor General of Pakistan (AGP) has the responsibility to evaluate the functions of accounts offices and treasuries, provinces, districts and, acquire the entire record as required to make final observations of significant materiality and risk. SAI Pakistan adheres to the international standards of Audit, which INTOSAI has communicated.

Audited financial reports of the country are afterward presented to the National Assembly's Public Accounts Committee, which evaluates and inspects the accounts and reports of the AGP for onward presentation to the National Assembly. As far as the climate change audit is concerned, initially, the audit's focus remained on the financial Audit of the expenditure. This financial Audit of climate change includes the assessment of the transactions about the climate and how the disbarment occurs to achieve the ultimate objectives of climate policy. The disclosure or the opinion regarding the accurate and fair reflection of the Annual Financial Statements for the entire fiscal year is then made in the financial audit report of the office of AGP. As for now, this process can further augment the capacity building of the auditors to conduct the performance audit of the climate change in line with the international practices.

There is a need to develop state-of-the-art audit techniques and constant professional development of human resources to cater to the emerging threat of climate change and carbon emission. SAI Pakistan still needs to work on this avenue as it is the main constraining factor. The major constraining factor, which the international SAI has pointed out, also pertains to the want of a deep and insightful understanding of the technical aspects of climate change audit methodology and technique. The main problem which arises during the conduction of such audits pertains to the limited capacity and expertise of the auditors during the formulation of materiality, risks identification and the benchmarks about climate change. It is also no denying the fact that the leading techniques and approaches used in the climatic change and carbon emission audit are the same as those used in the financial performance audit. Yet, there is a distinct skill set for correctly identifying the factors leading to the enhanced emission at the public sector level. This aspect of the climate change audit is still in its nascent stages, and only a few countries like Sweden, New Zealand, and the USA have employed accurate carbon audit techniques. However, SAI Pakistan, having limited resources has also conducted a few very comprehensive audits on the climate change such as Audit of “Earthquake Emergency Assistance Project (EEAP)”. The project was executed by Earthquake Reconstruction and Rehabilitation Authority (ERRA). The Project Audit Report covers both Performance and Financial aspects regarding the climate change. However, there is a need to put more emphasis on highlighting the technical observations pertaining to the carbon emission, the expenditure being incurred on its management and the overall output of the entire effort in the reduction of carbon emission.

Having said that, the plausible approach for the office of AGP would be to collaborate through the forum of ASOSAI for the continuous capacity building of the human resources for the effective accomplishment of the carbon audit. The main benefit of this approach would occur in the form of collaboration regarding the audit programming within the ambit of regional SAIs and the generation of guidelines and sharing of innovative audit techniques in the domain of climate change audit.

Various stakeholders in Pakistan can collectively make the entire process of climate change audit successful. First and foremost is the role of the PAC before whom the audit reports are presented. The audit report would be helpful only if the PAC holds the professional acumen to discuss and analyze the technical nature of such reports. Currently, the major drawback occurs in the form of excessive focus of the PAC on the matters related to corruption and misappropriation rather than the actual performance and achievement of the milestones in the public sector. Hence, there is a limited and relatively meagre emphasis on climate change policies in the country's political arena.

The SAI of Pakistan has the sacred command to lead a review of all administration substances. The studies are conducted utilizing INTOSAI Auditing Standards. Review reports have been reliably introduced to the lawmaking body somewhere around eight months after the end of the fiscal year. Nonetheless, there is a vast deferral in the survey of the external review reports by the lawmaking body and an excess remaining part on consistence with directions. While the extent of the lawmaking body's survey of the yearly financial plan is somewhat solid, the adequacy of this is discredited by time limitations under which the governing body needs to work while investigating the yearly financial plan, and by the protected arrangement that caters for broad redistributions and development, without a necessity for earlier response to the assembly. The shortcoming of administrative examination of external review reports has been a critical issue in the responsibility interaction for a long time. The PACs are overburdened with the errand of managing a comprehensive reports overabundance.

Primarily, there is a need to shift the climate change auditing techniques to the measured approach by introducing a carbon emission evaluation index system. It is foreseen that the upcoming climate change audit policy would be directed more towards the performance evaluation, proposal formulation system for the problem-solving, high-end integrative approach of the Audit, and the development of a macro-management system to reduce carbon emissions.

Secondly, the need of the hour is to facilitate the disclosure of information about the climate change audit. This step would help transmit the results of such Audit to the agencies and organizations concerned so that the strategies for the carbon emission reduction may be regularized. This aspect of the proposed method is in line with the Theory of Public Governance and the Stakeholder Theory, whereby the idea of supervision of the carbon emission reduction by the general public, office bearers and the taxpayers has been coined (Miles, 2017). This collaboration would ultimately help flourish the adaptability and learning among the stakeholders.

Another recommendation pertains to adopting a holistic approach toward climate change auditing. There is a need to embrace the cross-border environmental compensation system based on the information collected through the climate change audit. This type of all-inclusive carbon emission reduction approach is a helpful tool in alluding to the information disclosure to various subjects of Audit and afterwards enhancing the pertinence of audit information.

Another strategy would be the promotion of the updated and highly accurate environmental auditing accountability mechanism, which can have a long-term impact on reducing carbon emissions. The purpose of accountability and feedback is to constantly keep the prime carbon emission-related issues under consideration and rectify and reform the policies regarding the carbon emission audit.

Conclusively speaking, the overhauling of the climate change audit practice would be a multipronged tool for promoting the commitment to laws and environmental protocols and improving the legal and personal accountability in this regard. Only the collaborative and all-inclusive approach with the constant participation from all the stakeholders in the climate change audit can ensure the ultimate reduction of carbon emissions in the public sector domain.