The Audit Board of the Republic of Indonesia

Ms. Kristiana completed her bachelor’s degree at the State Accounting College (STAN) in 2000, and obtained a master’s degree in Accounting from the University of Indonesia in 2005. She is an auditor at the Audit Board of the Republic of Indonesia (BPK). During her career as an auditor, she has gained extensive experience in the audit of energy sector, such as renewable energy management and mining sector non-tax revenue compliance. She has also participated in several audits in public sector, including financial audit of both central and local government, performance audit in fiscal stimulus, and school operational assistance (Dana BOS) management.

This past year, technology has advanced faster than ever before, far beyond what was predicted. The Covid-19 crisis that has hit the world for more than a year is one of the leading factors of that.

The COVID-19 is an ongoing worldwide pandemic that has spread across the globe with devastating human and economic consequences. Even though it is a health crisis, it has a broad impact affecting various domains: general society, economy, education, culture, politics, etc. The pandemic has changed the everyday habits of people around the world, and the new realities of lockdowns and social distancing have accelerated the uptake of technologies. The demand for communication software such as Microsoft Teams and Zoom has been unprecedented, as hundreds of millions of people have abruptly been required to work remotely from home.

Global developments relating to the COVID-19 pandemic have also impacted the work of auditors. The Audit Board of the Republic of Indonesia (BPK) has the mandate to audit the management of and accountability for the state's finances. This mandate is unlikely to be postponed due to the pandemic. Therefore, BPK must adapt to the changes that occur. The pandemic forced auditor to move to a new way of conducting audits.

Prior to the pandemic, audit was conducted in a more conventional way. The majority of audit procedures – such as interviews, discussions, document examinations, inspections – were conducted in the auditee’s offices. The current circumstances has brought opportunities for auditors to do things more differently, by using new, or flexing the use of existing technology resources in auditing. Auditors have to adapt their works in obtaining sufficient and appropriate audit evidence, amid challenges in accessing people or information. The physical distancing that has been brought about by the pandemic has forced such audit activities to be done online.

This paper will discuss the experiences of auditors in using technologies during the energy sector audit conducted by BPK in the midst of the pandemic in 2020.

This performance audit of energy sector focusing on city gas networks and gas refuel station development was conducted from long distance and depended heavily on technology. The paper will present the audit objective, methodology, findings, as well as the use of technologies and its obstacles.

Energy, which is needed for every aspect of life, plays a key role for the development of countries. Countries need to use energy efficiently to have an advantage in the global competition and ensure sustainable development. A well-established energy system supports all sectors: from business, medicine and education to agriculture, infrastructure, communications and high-technology.

Energy growth is directly linked to well-being and prosperity across the globe. Meeting the growing demand for energy in a safe and environmentally responsible manner is a key challenge. As a country with a population of more than a quarter of a billion, Indonesia certainly has enormous energy demand. Today, most of the energy Indonesians consume comes from hydrocarbons, with crude oil being the dominant source of transportation fuels and liquid petroleum gas (LPG) for households. Although Indonesia contains large oil reserves, a lack of investment has caused Indonesia's oil production to decline during the last two decades. In contrast, Indonesia's oil consumption is showing a steady upward trend.

In order to reduce dependence on petroleum, the Indonesian government has made various efforts to diversify energy. In 2007, the Indonesian government embarked on the largest household fuel conversion program, to phase out the domestic use of kerosene completely in five years and replace it with liquefied petroleum gas (LPG). This was primarily motivated by the rising cost of kerosene subsidies. The program was successful in reducing domestic kerosene use by 92% in less than 10 years.

But then there is a new problem, the nation’s demand for LPG is increasing over time, as well as the subsidy burden borne by the government. The use of liquefied petroleum gas (LPG) for cooking in Indonesia has increased rapidly, with more than 70% of households now using the fuel, a large shift from kerosene. After a big cut on fuel subsidies in 2015, LPG emerged as the biggest component of fuel subsidies in Indonesia. For this reason, since 2015 the government has formulated a program to convert LPG and petroleum to natural gas by building gas refuel stations (SPBG) and city gas networks. The main objective of this program is to reduce LPG subsidy in households and fuel subsidy in the transportation sector.

The city gas network development is still a national priority program in the RPJMN of 2020-2024 with a target of building more than four million connections by 2024. However, the gas refuel stations development is no longer a priority program even though only 73 of 118 gas refuel stations have been built until 2019, and there is no target for 2024.

The Sustainable Development Goals (SDGs), also known as the Global Goals, were adopted by all United Nations Member States in 2015 as a universal call to end poverty, protect the planet and ensure that all people enjoy peace and prosperity by 2030. The 17 SDGs are integrated—that is, they recognize that action in one area will affect outcomes in others, and that development must balance social, economic and environmental sustainability.

In the energy sector, the world is making progress towards Goal 7 of SDGs, with encouraging signs that energy is becoming more sustainable and widely available. Access to electricity in poorer countries has begun to accelerate, energy efficiency is continuing to improve, and renewable energy is making impressive gains in the electricity sector.

The Indonesian government has issued Presidential Regulation number 59/2017 concerning the Implementation of the Achievement of the SDGs. This regulation sets targets for each goal and presents the action plan for responsible government institutions to achieve them. The Indonesian government has set a main goal for the energy sector that is to guarantee universal access to affordable, reliable and modern energy services by 2030.

Unfortunately, until 2020, there were only 537,916 household connections built, less than 50% of the 2019 target. Although this target had not been achieved, the government set quite an ambitious target in the RPJMN of 2020-2024, which is to build 4.7 million household connections.

In 2020, BPK conducted performance audit concerning city gas networks and gas refuel stations development at the Ministry of Energy and Mineral Resources (MEMR) and state-owned enterprises. The objective of this audit was to assess the effectiveness of this development in supporting the achievement of government objectives in the use of natural gas in households and transportation sectors. This audit is mainly focused on three aspects, i.e. planning, implementing, and monitoring. The audit scope is the city gas networks and gas refuel stations development from 2015 to mid-2020.

The audit approach determines the nature of the examination to be made. It is an important link between the audit objectives, audit criteria and the work done to collect evidence. Performance auditing generally follows one of three approaches:

The system approach used the input-process-output-outcome model (IPOO model). Then auditors identified significant factors that affected each stage and the problems were found. The identification of problems is obtained from various sources, such as ministry performance reports, research results from outside parties / NGOs / academics, as well as news in various media. In this examination, BPK only assessed the achievement of the middle-term outcome, not the long-term outcome. (Figure 1). 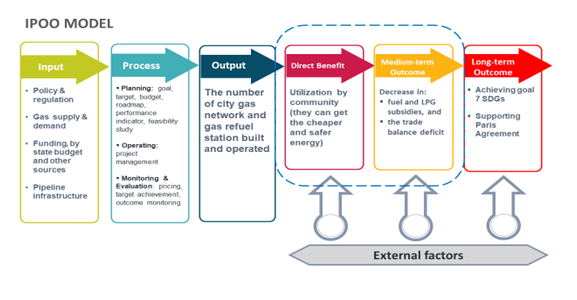 The Emerging Use Of Technology In Audit Methodology

The audit standard requires auditors to design and perform appropriate audit procedures to obtain sufficient, relevant and reliable audit evidence to draw conclusions on an activity. However, the Covid-19 pandemic increases the risk of auditors not obtaining sufficient evidence. Auditors need to establish alternative procedures to overcome those risks.

The pandemic has forced auditors to operate remotely and embrace digital technologies - whether they were ready to or not. Covid-19 has significantly accelerated the evolution towards a "virtual" audit. The audit methodology and the emerging use of technology in this audit are as follows:

There are other advantages in using technology in audit:

However, there are also challenges encountered during the audit by using technology:

Figure 3 shows the value of LPG imports using realistic scenario data, namely economic growth of 5% using real figures for 2015 - 2019, adding gas lines only around 90 thousand SR per year according to the trend in the last five years, and without any other policies. The simulation shows us that LPG import will increase significantly.

BPK also conducted a simple linear correlation and regression analysis by comparing the effect of city gas consumption with the realization of 3 kg (subsidized) LPG consumption in 2014 - 2019 in the city of Prabumulih, where 80% of the people have benefited from gas network. The results of the analysis show a negative coefficient of 0.3, which means that the construction of city gas has not had a significant effect in reducing the 3 kg LPG subsidy. The Ministry of Energy and Mineral Resources needs to study why this happens and find solutions so that the city gas policy can achieve its objectives, one of which is to reduce the 3 kg LPG subsidy.

The Covid-19 pandemic has abruptly forced change, in a matter of days. Digital transformation has become a necessity during these unusual times, when physical distancing and remote work have become the norm. But the future of audit isn't just about remote audits; it's about transforming underlying processes using technology to achieve three objectives: a higher quality audit, a more efficient audit and better business insights for our clients through the traditional audit process.