International parallel performance audit on Prevention and Treatment of Tuberculosis has been carried out as a part of the activities of the Deutsche Gesellschaft für Internationale Zusammenarbeit (GIZ), supported by the EaP Regional Fund (EaPRF) - Project “Strengthening the capacity of Supreme Audit Institutions (SAI) in the Eastern Partnership countries to monitor the achievement of Agenda 2030 objectives.1” The fight against tuberculosis, as a challenge for humanity affecting mostly low-income vulnerable groups and increasing inequality in society, is one of the important components of the UN sustainable development goals

The project aimed to strengthen the capacities of the Supreme Audit Institutions of the Eastern Partnership countries by monitoring Agenda 2030 in accordance with the International Standards of Supreme Audit Institutions (ISSAIs) for Performance Auditing and to conduct the Parallel Performance International Parallel Audit on Prevention and Treatment of Tuberculosis (TB). Into this, international parallel audit was conducted under the coordination of the State Audit Office of Georgia.

Independent audit reports within the national mandates were prepared by the SAIs of Azerbaijan, Georgia and Ukraine. In the process of planning and carrying out the parallel audit, parties followed INTOSAI standards (ISSAIs 300, 3000 – performance auditing; ISSAI 5800 – Guide on Cooperative Audits) national standards and audit guidelines, as well as the provisions of the “Common position paper concerning the cooperation”, signed by the SAIs of Azerbaijan, Georgia and Ukraine in Kyiv October, 2019. The project placed particular emphasis on auditing government policies and measures to implement the Sustainable Development Goals – SDG 3 Health and Well-being. The scope of the parallel audit mainly covered 2016-2019 period and was determined with early detection and preventive measures of TB; and proper treatment of TB infected patients.

Tuberculosis is one of the most dangerous and widespread infectious diseases worldwide.2 According to the World Health Organization (WHO) data of 2018, about 10 million people worldwide were infected with tuberculosis, of which 1.5 million died. Following the economic analysis conducted by the international company "KPMG"3, the world economies are losing an average from 0 to 2% of their GDP per year due to the damage caused by the spread of tuberculosis. In the Western European countries, where the prevalence of tuberculosis is less than 10 per 100,000 people, the economic effect is negligible, while in African countries, where the prevalence is more than 200 on average, the loss is up to 2% (see Figure 1). Along with other UN countries, Azerbaijan, Georgia and Ukraine, share the SDG objectives With SDG 3.3 that entails ending the epidemics of AIDS, tuberculosis, malaria and neglected tropical diseases and combat hepatitis, water-borne diseases and other communicable diseases by 2030. The fight against tuberculosis has a specific" The End TB"4 strategy adopted by the WHO and shared by all participant countries. The prevalence of tuberculosis in Azerbaijan, Georgia and Ukraine is still high compared to many European countries, therefore, there is still significant potential for improvement (See Figure 2). 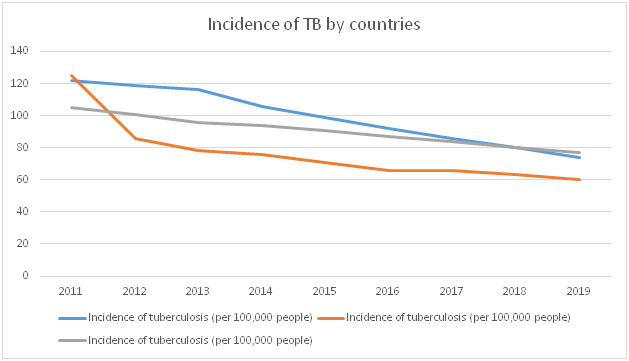 Drug-resistant TB is a significant problem on global, regional and country levels. SAI-s of Azerbaijan, Georgia and Ukraine report the high rate of drug-resistant TB cases. In general, WHO explains this trend with two reasons: first, improper management of TB treatment, and second, an increased risk of spreading of the relevant form of TB. The combination of the above factors have been reflected in the parallel performance audit of anti-TB measures presented in this joint report. The scope of the parallel audit mainly covered 2016-2019 period and was determined with a) Early detection and preventive measures of TB; and b) Proper treatment of TB infected patients. The parallel audit placed a particular emphasis on auditing government policies and measures to implement the SDG 3 - Health and Well-being goals.

The SAIs of Azerbaijan, Ukraine and Georgia are reporting some common shortcomings in TB prevention and treatment management systems hindering the process of achieving SDG goals and eradication of TB by 2030, specifically:

The SAI of Georgia believes that international parallel audits identify common problems, and challenges among countries which hinder the SDG achievement. Considering the findings and, issuing improvement oriented recommendations to the governments is a significant commitment of the Supreme Audit Institutions for achieving SDGs.