Natural resources play a vital role in the sustainable economic development of any country and are crucial for their inbuilt value of inter-generational equity and sustenance. The rampant over–exploitation of these resources in recent times has resulted in harmful impact on the environment.

The concept of National Resource Accounting (NRA) has emerged to capture the intimate interplay between the various components of the natural environment and the economic progress of a country. It is based on the concept ‘measurement of a resource leads to its better management’.

The need for NRA took its first step at the United Nations (UN) conference on Human Environment in 1970 when the relationship between economic development and environmental degradation was discussed for the first time. The Brundtland Commission, set up by the UN, articulated the idea of close association between the environment and economic activities in 1987, which was followed up by environmental accounting and the Earth Summit at Rio de Janeiro in 1992. In line with these developments, the UN released the international standards for the compilation of national accounts in 1993 and revised it in 2009. Simultaneously, the UN also adopted the System of Economic and Environmental Accounting – Central Framework (SEEA – CF) in March 2012 – which is the latest internationally accepted and adopted framework for resource accounting. The SEEA – CF prescribed a four-stage implementation process as mentioned below: 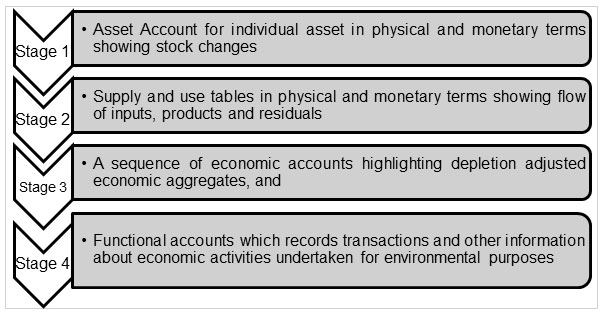 While developing the framework, the SEEA – CF acknowledged initial problems and constraints to be faced by the countries and thus, the framework allows flexibility and country specific needs to be prioritised.

NRA has deep inter-linkage to sustainable development; and 10 of the 17 goals (Sustainable Development Goals or commonly known as the SDGs, 2030) directly or indirectly relate to management of natural resources and their accounting. Government of India is a signatory (25 September 2016) to the UN General Assembly resolution on adoption of SDGs titled, “transforming our world; the 2030 agenda for sustainable development”.

The Working Group of Environmental Auditing (WGEA) under the INTOSAI has recommended (2010) that country where NRA has not been developed, the SAIs need to assist the countries in developing the framework of NRA.

The initiative of GASAB:

In India, a number of studies have been carried by the Ministry of Statistics and Programme Implementation over the years, including a Report on Green National Accounts in India – A framework published in 2013. The Report was discussed in an international workshop and accepted by Government of India.

Despite SEEA – CF coming into being in 2012 and the studies carried out under the concerned Ministry, a verifiable and viable framework listing the targets, milestones and timelines for implementing NRA in India was not forthcoming. The Government Accounting Standards Advisory Board (GASAB) established under the aegis of CAG of India to formulate Government accounting standards for improving Government accounting and financial reporting, has taken the initiative (2019) by developing a framework for implementing NRA on priority as a nationally important project.

GASAB came out with a Concept Paper on implementation of NRA in India in July 2020. The Paper inter-alia discussed the concept and its inter-relation with the SDGs and Climate Change, international progress on environmental accounting and merger of the concept with economic environmental accounting, progress in other countries. GASAB has suggested a well laid out implementation plan divided into three term goals in consonance with the strategy envisaged by the SEEA – CF.

Three term goals envisaged by the Concept Paper of GASAB

Electronic copy of the Paper is available in the website of GASAB (http://gasab.gov.in/gasab/pdf/NR-Accounting-final.pdf).

The Concept Paper has also underlined the probable issues and challenges that could come up on the way of implementation and discussed the suggested ways out for their mitigation. The importance of taking the public/private manufacturing sector on board using natural resources as their raw material was also discussed and a framework suggested for bringing them under the ambit of NRA. Besides these, the Concept Paper suggested the templates for preparation of Asset Accounts on Mineral & Non-Renewable Energy Resources and for other resources namely water resources, forestry & wildlife resources and land resources.

In order to test the draft templates of Asset Accounts on Mineral & Energy Resources included in the Concept Paper (Chapter XI of the Paper refers) in real life scenario, pilot studies were initiated (August 2020) in five States (Andhra Pradesh, Goa, Meghalaya, Rajasthan and Uttar Pradesh), of which, three States namely, Goa, Meghalaya and Rajasthan have completed the pilot studies (March 2020) successfully preparing the model Asset Accounts on Mineral and Non-Renewable Energy Resources in these three States.

Consultative process – involving stakeholders to make the process robust and inclusive and buy in by States:

In order to ensure wider consultation with the diverse stakeholders, GASAB has constituted a consultative group in GASAB HQ for drawing technical expertise and inputs from subject experts and academia while steering the implementation process following the action plans suggested in the Concept Paper, with special emphasis on the templates of Asset Accounts before their roll out for implementation. The group consists of stakeholders from ministries in the federal Government, five provincial Governments and Accountants General (both Audit and Accounts & Entitlement) under the SAI India in these States (provinces), expert agencies conducting research in natural resources across the country. This group is being broadbased by associating with organisations such as National Remote Sensing Agency (NRSA), The Energy and Resources Institute (TERI) who have done pioneering work in this field.

GASAB has also constituted State NRA Cells in each States (provinces) with representatives from the Audit, Accounts & Entitlement Offices under the CAG’s field formation and the State Government Departments for spearheading the implementation of NRA in the States in consonance with the action plans envisaged in the Concept Paper.

The templates, duly updated with the results of the pilot studies, were circulated among the NRA Cell members and further enriched with their suggestions/inputs. The modified templates of Asset Accounts were further discussed in a virtual meeting with the NRA Cell in September 2021 and their comments/views incorporated to make the templates robust and inclusive.

In order to take the States on board as one of the most vital stakeholders in the implementation process, the highest echelons of the States were informed (September 2021) about our endeavour and the vision of the project which was followed up with virtual presentations covering topics like the concept of NRA, progresses by other countries, works done till date in India including those under the aegis of GASAB, successes on pilots in the States, constraints faced in pilot studies, expectations from the States and ways forward for implementing NRA in the country. We have held seven virtual presentations between 31 August and 28 September 2021 covering 28 States in which the highest echelons in the States along with the Accountants General besides members of State NRA Cells were present. The States wholeheartedly welcomed the initiative and assured of all co-operation. The views/suggestions emanating from these meetings helped in finetuning the templates and the way forward.

As the Concept Paper envisaged commencement of the project from the States, it was important that proper training and capacity building was ensured for the Officers and staff in our field formation and also the State Governments. Accordingly, virtual trainings and workshops were arranged on implementation aspects of NRA by holding virtual meetings to accommodate more personnel per meetings on a monthly basis.

State specific workshops for the State Government Officers and employees were also held for dissemination of the concept, expectations, works to be done and underlying challenges.

The concept visualisation, detailed actionable plans, preparation of model templates and their successful test run in the pilot states coupled with extensive consultative processes and continuous trainings/capacity building has culminated in a book on templates of Asset Accounts on Mineral & Non-Renewable Energy Resources. The book contains the overall processes involved, works done, the templates of the Asset Accounts and mechanisms suggested for further streamlining the control mechanism on mining and allied activities in the States and ensuring regular flow of information to ease out the building up of Asset Accounts in future years.

Electronic copy is available at http://gasab.gov.in/gasab/pdf/TemplateAssetAc.pdf.

The books have been circulated to the Chief Secretaries, State Government Departments, Accountants General for preparation of the first draft of the Asset Accounts on Mineral & Non-Renewable Energy Resources in the States for the year 2020-21 by March 2022 with the aim of developing a well-defined methodology for preparation of Asset Accounts, including identification of underlying assumptions. In order to hand hold and guide the States, monthly meetings are being held with the States till completion of the Asset Accounts.

The Asset Accounts, once compiled, are designed to aid in evidenced based decision-making and good governance by providing the following for the policy makers.

Besides the inputs to the policy makers, the Asset Accounts will help with an outline of resource bases across the States adding immense value towards the planning for resource exploitation and policy framing for the present as well as sustainability of resources for the future generations. In addition to these efforts and to assist the country in preparing the Asset Accounts on selective resources to meet the stage 1 of the SEEA – CF framework, GASAB is also working on a disclosure statement on receipts from exploitation of natural resources and expenditure incurred on resource management and mitigation of environmental degradation aimed at providing inputs for stage 3 of the implementation strategy enshrined in SEEA – CF.

Thus, with this endeavor, GASAB under the aegis of the CAG of India, is attempting to achieve two of the four stage implementation process envisaged by the SEEA – CF (Stages 1 and 3) while providing inputs for the other two stages (Stages 2 and 4) of integrating environmental inputs and other related information into the economic indices of the country.