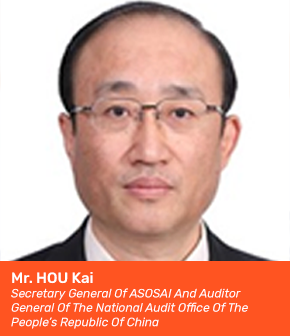 From the Desk of the Secretary General of ASOSAI

At present, the impacts of human activities on climate and the global environment are becoming ever more pronounced. With regions witnessing more frequent weather extremes including high temperatures, heavy precipitation and protracted drought, the world is facing increasing challenges to our food and water security. Yet history has proved time and again that crises can serve as important opportunities for the international community to embrace change and reform. Today, the relationship between humankind and nature has been given greater importance than ever before.

As long as all countries across the globe pool their efforts together, humankind can stem the tide. By taking measures such as mapping out goals and targets, cutting carbon emissions and promoting climate finance, we can minimize the negative impacts of climate change in respect of weather extremes, famine and health issues. Under the auspices of the Paris Agreement which entered into force in 2016, all contracting parties have committed themselves to deepening consensus and formulating specific rules. Successive Conferences of the Parties (COP) of the UNFCCC have placed greater emphasis on the international consensus to address global climate change and, in doing so, have preserved the trust of the international community in multilateral mechanisms. In particular, COP 26 held in November 2021 in Glasgow, UK achieved important milestones in implementing the Paris Agreement and dealing with global climate change, resulting in further recognition of carbon neutrality and temperature goals.

SAIs have an irreplaceable role to play in urging governments around the world to fulfil their responsibilities in dealing with climate change. As pointed out by the resolution on Promoting the Efficiency, Accountability, Effectiveness and Transparency of Public Administration by Strengthening Supreme Audit Institutions (A/RES/66/209), the United Nations “recognizes the important role of Supreme Audit Institutions ..., which is conducive to the achievement of ... the internationally agreed development goals.”

In the past decades, the rolling out of INCOSAI outcome documents such as the Cairo Declaration, the Johannesburg Accords, the Beijing Declaration and the Abu Dhabi Declaration as well as ASOSAI documents including the Hanoi Declaration and the Bangkok Declaration have placed higher and higher requirements for SAIs to carry out environmental audits in respect of promoting the sustainable development of economy, society and environment. It has already become a consensus among public sector auditors in Asia and from around the world that SAIs can demonstrate higher relevance in promoting the SDGs and must play a greater part.

To clinch an early victory against COVID-19 and restore economic growth remains the top priority for the international community. In the critical moment, the unity, synergy and energy demonstrated by ASOSAI encourages us all. As a regional organization of SAIs, our community has dedicated itself to promoting resource sharing, experience exchanging and capacity building through careful plans and dynamic actions. It has thus made significant contributions to various engagements carried out by SAIs against the backdrop of striving for carbon neutrality, and achieved remarkable results. I firmly believe that under the guidance of the common goals, our concerted efforts will surely shape our shared future.