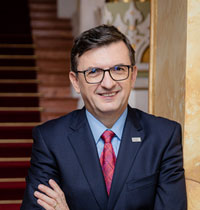 Mr. László Domokos , PhD, economist, honorary university professor, president of the State Audit Office of Hungary, member of the Fiscal Council, chairman of the Public Benefit Association of Hungarian Financial and Economic Auditors. His main research area is maintenance of good governance, with particular attention given to the tools of good governance in which the audit institutions appear as guarantor organisations. His publications cover the areas related to the audit of public finances. email: international@asz.hu State Audit Office of Hungary

One of the key environmental, economic and social challenges of our age is keeping the climate balance of the Earth on a sustainable course. With its effect on water cycle, atmosphere, biodiversity, and the complex ecological systems of the land, water and ice surfaces, the balance of the climate system is a fundamental condition for ensuring a liveable environment. Climate balance, therefore, is a key to the health of our planet and the future of humankind. Human activity has interfered with this natural system to a critical degree, therefore its regeneration must be fostered with progressive changes in order to protect our life, health and the natural values.

Aligned with the international climate agreements and the UN Sustainable Development Goals, most countries, including the member states of the European Union with Hungary set the implementation of a sustainable climate neutral economy as their strategic goal. One of the major policy objectives is to radically reduce the emission of greenhouse gases, such as CO2 mostly responsible for climate change by 2050. The implementation of the zero emission goal necessitates fundamental economic and social transformation in Europe and in Hungary as well, which must be performed in a cost-effective, just and socially balanced way. In this the operation and appropriate management of the state systems play a significant role and have significant responsibility. It means that well governed, well-functioning states are also necessary for implementing our goals.

One of the major tasks of the supreme audit institutions is to support the well-governed operation of the state. In addition to this, the strategic documents of the audit institutions almost always declare support for establishing sustainability as an outstanding goal. The mission of our institutions is therefore to contribute to improving the efficiency and effectiveness of the measures taken to build climate neutral economies through our audit, analysis and advisory activity and feedback. We must contribute to the successful implementation of the climate policy goals of our countries, thus reducing the negative effects of climate change not only in the territory of our own country but our geographical region as well, supporting the restoration of global climate balance this way.

Audit goals and experiences in Hungary

The supreme audit institution of Hungary is also committed to the implementation of the sustainability, environment protection and climate policy goals. Aligning with the interests and principles declared in the Fundamental law by the Parliament and in the national strategy documents by the Government, it particularly focuses on the assessment of measures supporting the implementation of a sustainable, natural and healthy environment in its audits.

In the past decade the SAO assessed the systems, infrastructures and developments critical from the point of view of environment protection and climate change within the framework of targeted audits. The SAO examined the effect of the measures taken in respect of air pollution and climate policy in the course of audits and follow-up audits, and audited the management of carbon dioxide quotas, the measures serving the protection of air quality, as well as ragweed control and waste management.

For Europe, including Hungary, to become one of the first climate neutral territories of the world by 2050 it must transform its energy system that is responsible for 75% of greenhouse gas emission in the EU. For this reason the SAO audits targeting the use of funds spent on environmental protection, the protection of air quality and climate policy also covered areas such as, for example, the energy efficiency or electricity supply system of public buildings.

In addition to managing organisations, our audits also covered the operation of state partner organisations and institutions, public enterprises, and organisations and schemes supported from public funds that are involved in the implementation of these goals.

For example, within the framework of international audits we assessed the use of funds spent on cycle path network development supporting air quality together with the Supreme Audit Office of the Slovak Republic. 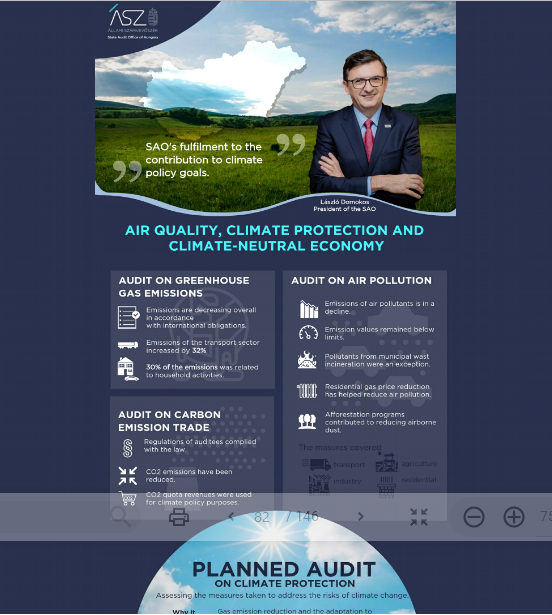 One of the principles of the State Audit Office of Hungary is that a good state may not be implemented without systems monitoring, measuring and assessing state performance. Similarly, the definition of concrete indicators and target values with the relevant objectives are essential for assessing the impact of the measures. For this reason one outstanding focal area of the audits performed by the SAO was the assessment of the implementation of national strategies, and the progress and monitoring of the performance targets (National Clean Development Strategy, National Climate Change Strategy, National Sustainability Framework). Depending on their type, the audits naturally covered the assessment of the operation, regulation and financial management of the concerned institutions and systems, and the task performance of the governing authorities (strategy development, principles, authorities, indicators, etc.)

Our audit experiences in the areas directly related to climate balance, air quality and CO2 emission are the following.

According to the findings of the audit concerning the measures serving the protection of air quality, the average annual concentration and total emission of air polluting materials decreased in a trend-like way. The surveys and analyses of air quality were taken into account during the elaboration of the goals and the planned and implemented measures (see Figure 1) and indicators, which largely contributed to this reduction. With the exception of one, the limit values for air polluting materials targeted for 2020 were implemented on a pro rata temporis basis. The emission of volatile organic compounds exceeded the limit value especially in the winter months. The concentration of materials particularly dangerous for health is related to the burning of household waste therefore its reduction may largely be supported by the environmentally conscious behaviour of the population. Several factors must have contributed to the reduction of fine particulate matter pollution, especially significant from the public health aspect. Among them the effect of the implemented measures specified in the air quality plans, the reduction of retail gas prices (utility cost reduction), the more frequent cleaning of public roads and afforestation programmes must be emphasised. 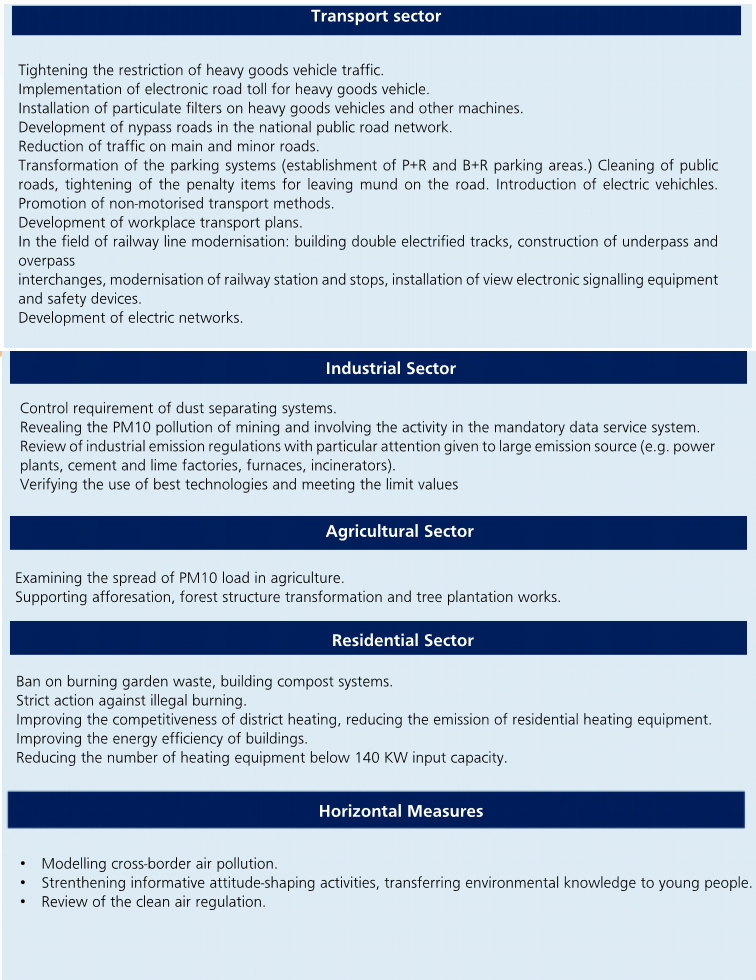 Source: edited by SAO based on strategic documents and reports on their implementation

Based on the findings of auditing the effect of the measures taken against air pollution and in the field of climate policy, our country fundamentally complied with its international obligations undertaken in the period between 2004-2010 within the framework of air pollution reduction and climate protection. The professional, legal and organisational tools were in line with the international and domestic requirements. In Hungary transport and industrial, and to an increasing degree, residential emissions are typically responsible for air pollution. Within the emission figures, the share of road transport emission is decisive. Resulting from the increased volume and share of transportation, within the total greenhouse gas emission (GG) only the emission indicator of the transportation sector increased significantly, by 32% in the audited period. According to KSH (Hungarian Central Statistical Office) data, in 2018 over 70% of GG emissions was related to the national economy, while nearly 30 % concerned the activities of the households (heating, cooling and vehicle use). The measures targeting the reduction of air pollution and climate protection were all in all supported by over HUF 500 billion worth domestic and EU funds. Figure 1 presents the changes in greenhouse gas emission at national economy level in Hungary. 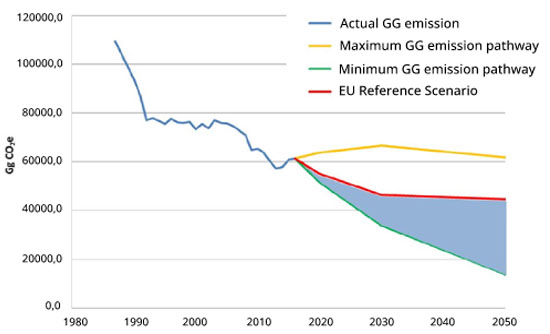 Hungary, as one of the countries signing the Kyoto Protocol, performs international emission trading. Trading in carbon dioxide quotas has been covered by a number of SAO audits. The audit aimed at the above-mentioned air pollution and climate policy measures found that Hungary spent the revenues originating from the sale of emission units at its disposal (from the sale of 12 million units under four contracts between 2008-2010) on energy saving developments. During the audit of managing carbon dioxide quotas the SAO also found that in the period between 1 January 2013 and 30 September 2015 the regulation of the audited organisations concerned with management complied with the legal provisions. The regular management of the approved emission units achieved its goal as carbon dioxide emissions decreased, and the revenues from the sold quotas were also used for climate policy goals. Changes in the revenues for special use resulting from the sale of quotas are presented in Table 2.

Source: Own edition based on the data service of the audited organisations

Future audits in the field of climate protection

The State Audit Office of Hungary will continue the assessment of the field in the future.

The approved audit proposals include the theme titled ‘Assessment of the measures taken to manage the risks of climate change’. The objective of the audit is to assess whether the measures necessary for managing the risks related to climate protection were specified in the strategic documents, and whether measurable goals were assigned to the measures, and the indicators necessary for measuring the implementation of goals were set up; whether an appropriate system monitoring the implementation of objectives was established; whether the impact of measures and the results thus achieved were assessed; and whether the synergy effects and the results achieved by the measures were assessed; how the performance of the data collection, statistical and registration tasks of the minister of agriculture contributed to the operation of the monitoring system. The findings of the audit may support the success of this process, highlighting the potentials in the harmonised implementation of measures, the achievement of objectives and the development of the system monitoring the achieved results.

The justification for the subject is that in its Decision No. OGY 18/2020 (VI. 4.) on urgent tasks due to the extent of climate change, the Parliament declared the reduction of global warming and adjustment to climate change to be a matter of national strategic significance. The significant reduction of greenhouse gas (GG) emissions, the main reasons for the accelerating climate change and adjustment to climate change require developments of extraordinary volume, which can be implemented with the use of budgetary resources. The estimated total cost of implementing the National Clean Development Strategy (2050) is 2-2.5% of GDP annually over a period of 30 years. The suitable, effective, efficient and economical use of public funds spent on government measures and state developments related to climate change and support for the economic operators and the population to improve energy efficiency and renewable energy production is also a requirement.